Why do hip problems occur, and can they be prevented?

Children, young people and adults with physical disabilities such as cerebral palsy are at increased risk of developing problems with their hips. The hip can become completely dislocated over time; a phenomenon technically known as hip luxation. But what causes hip problems, and can they be prevented?

We’re delighted to welcome Malin Larsson and Hanna Bengtson, both physiotherapists, as guest bloggers on the subject of hips. They’ll be addressing the following topics in a three-part series of articles:

Malin Larsson and Hanna Bengtson run the weyoume.se website, an information site for parents of children with disabilities.

Here’s our first article. The other two will be published over the next few weeks.

What is a hip joint, and why are hip problems so common among people with disabilities?

Our bodies develop in correlation to our world and the things we have to do. Young babies start to challenge their bodies by making little movements straight after birth; they make tiny kicks and push rhythmically with their legs against anything they can reach. As they develop, their hips are progressively challenged with greater freedom of movement and variation of weight bearing; pushing off when scooting, making parrying motions when playing in a sitting, crawling or kneeling position, and eventually they face the strain of holding the body fully upright against gravity when they stand. All these elements provide variation of movement and weight bearing that requires the hip to develop that fantastic ball joint. A ball joint that’s stabilised mainly by tendons and muscles so as to allow free movement in all directions. A ball joint that allows for a wide range of movement while also helping to create the stability we need to help us walk and transmitting the power we need to walk, run, jump and play.

But what happens when muscles with too much or too little tension prevent those little movements happening early in life? What happens when the variation in movement and locomotion is limited by the fact the body is growing and becoming heavier more quickly than the motor skills can develop? What happens when the hips and pelvis don’t bear the weight they need to in order to help the body and brain develop movement, stability and strength?

There’s a simple answer to that: no input means limited output. Building up the musculoskeletal system in functional terms will be a problem if the body and brain don’t receive enough information to process. That’s something many children with motor disabilities can confirm.

First and foremost, we need to have a think about the hip joint itself; what does it look like, and what do we need to know when we refer to dislocated hips? So let’s take this a bit at a time. 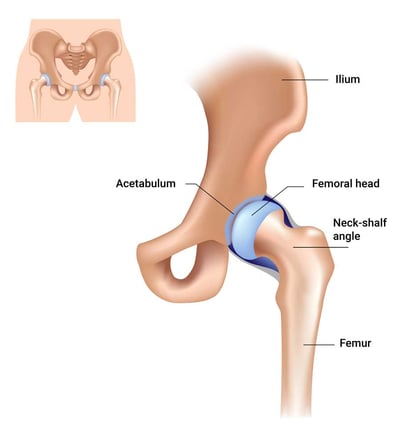 The pelvis is the dished skeletal complex that starts off at the point where the spine ends. It’s the hub that links the torso and upper body to the legs. There are leaf-shaped bones on either side of the end of the spine that link together via the sacrum at the back and via the pubic bone at the front. The pelvis forms the roof of the hip joint, so the configuration of the pelvis is significant to how the hip joint moves. Acetabulum: The acetabulum is the part of the hip joint formed by the pelvis, and it should provide a little socket that accommodates the femur. The acetabulum is almost entirely flat when the baby is born, but movement and weight bearing cause it to become increasingly dished, almost as though the femur were creating a kind of cradle for itself on account of activity.

Angle of the femoral neck

The hip joint needs to be able to move freely in many different directions, so it’s stabilised by parts of the skeleton to a relatively small extent. Instead, a number of stable ligaments run between the femur and the pelvis in order to create a balance between mobility and stability. Moreover, the hip joint is affected by the work done by the muscles, and an inability to engage certain muscles combined with muscle tension doing the opposite (antagonists) has a major impact on the joint’s function and internal environment.

What happens in the body

So now we understand the big picture a little more, let’s get back to our question. What happens when the hips and pelvis don’t bear the weight they need to in order to help the body and brain develop movement, stability and strength? It goes without saying that all parts of the hip joint can be affected, no matter how ingenious it is.

The pelvis has to respond to the strain of the alternating movement of the legs while also supporting the upright weight of the upper body against the centre of gravity. This strain stresses the joints, tendons and muscles, and activity results in adjustment of the stability and width of the pelvis in order to meet the demands placed on it. That’s why it’s not unusual for people with no form of independent mobility to have narrow pelvises.

The acetabulum has to provide a defined, guiding surface in which the femoral head can move. As we mentioned above, this surface is shaped according to the strain placed on it. Bearing the weight of the body against gravity – by kneeling, standing or walking, for example – is a major contributor to the shaping of the acetabulum, but even the tiny scooting movements made by infants in the prone position begin this development. Too shallow an acetabulum that doesn’t provide the defined, guiding surface needed by the femoral head is one of the most common causes of hip dislocation in people with disabilities.

The muscles around the hip joint have to provide stability while also allowing for play and movement. Children’s muscles don’t grow and extend when they’re used, but they do allow them to gain better control over their movements as more nerve endings connect to motor units in the muscles. The more connections, the more power they can develop. Muscles become good at the things they’re challenged to do, but if children don’t crawl, climb, stand up or jump, the muscles at the back and outside of the hip aren’t strained they way they need to be in order to do their jobs. Instead, they contract too high on the front and inside of the hip and help to pull the femur in a direction that increases the risk of dislocation.

What can we do about it?

As you can imagine, people with motor disabilities struggle with some major challenges with their hips! But luckily, they don’t have to fight alone. Many people in the healthcare sector are their allies. Orthopaedic surgeons, orthopaedic technicians, physiotherapists, occupational therapists, personal assistants and family members are all doing everything we can to create conditions and opportunities to help children’s hip joints to develop as positively as possible. But what are the most common ways of preventing hip problems nowadays, and why do we resort to these interventions? Which of the above elements can be influenced by means of these interventions? And what choices are available when the hip is already slipping out of place? That’s something we’ll be looking at more closely in part 2 of our series of articles focusing on hips. Stay tuned!

Malin Larsson is a physiotherapist and has a background in sports medicine. Her daughter was born with a disability in 2011, and this inspired her to work with young children and people with disabilities. She’s focused on this field ever since. She began to look at the world through new eyes thanks to her strong little girl facing some major challenges. Malin has been curious to understand basic motor development in depth because of this little girl and her two siblings. She’s gained an insight into just how many people are needed to bring things together to help a child with challenges, and she’s aware that everyone involved needs to have this information presented in different ways if they’re to be able to play their part. Hanna is strongly committed to children’s right to development, to the fact that they should ALL be offered the opportunity to achieve their maximum potential. She’s worked in rehabilitation for more than a decade, working with both children and, adults and has experience of lots of different diagnoses, both congenital and acquired. Taking Functional Motor Skills as her starting point, she wants to get involved and help the network to understand the child’s needs and requirements to help them make progress.

The hip is slipping out of place – so what do we do?

People with physical disabilities often experience hip problems. That said, there are things we can do to improve the development of...