Ever since Katarina was little we have aspired to do everything as a family. If the activity was difficult for Katarina, we tried to find equipment that allowed her to participate. We have always focused on the opportunities and not the barriers.

We live in Baerum, in the middle of Kolsas and Baerums Verk. The family Naess Wabo consists of mother, father, big brother and little sister. Katarina was born 21 years ago. She was diagnosed with a genetic disorder which means that she has severe developmental delay and has complicated epilepsy. Katarina learned that she has Angelman's syndrome.

Throughout Katarina's upbringing, activity has been important to us. Katarina sits in a wheelchair, but she can walk when she gets someone to support her. She is alert, expresses easily what she thinks, and she becomes very happy when she is activated.

To be able to enjoy the activities she participates in, Katarina's general health condition must be well taken care of, her mother emphasises. She has regular control at, among other things, the dentist, the doctor and physiotherapist. 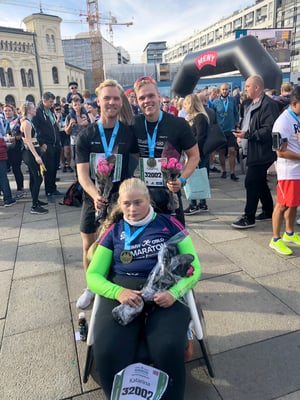 It started with getting hold of a Team Twin Edition running chair, as well as two assistants who wanted to run with her. Prior to the day itself, the three trained and ran together.

Katarina is thrilled by the running, and she has fewer epileptic seizures whenever she is active. The experience has been entirely positive.

As a mother, I am very committed, I want to find new activities so that we can constantly reach new goals, but I am also humble that everyone must find their own way, their own solutions. It is obvious that activities are the key to making Katarina happy, so we do what we can to facilitate. I do what I can, while her big brother is a kind of project manager and organizer. He is juggling a number of tasks. The past years, Katarina has also set off down the alpine slopes and been on many mountain walks.

Participating in activities means inclusion and sense of achievement

Activation is positive in itself, but it has several aspects for both her and others. When Katarina exercises, participates in the marathon or glides down the slopes, she is seen. She is seen and noticed by the most skilled in the field, she is included and receives positive feedback. She also shows everyone else that it is not dangerous to be active, on the contrary! 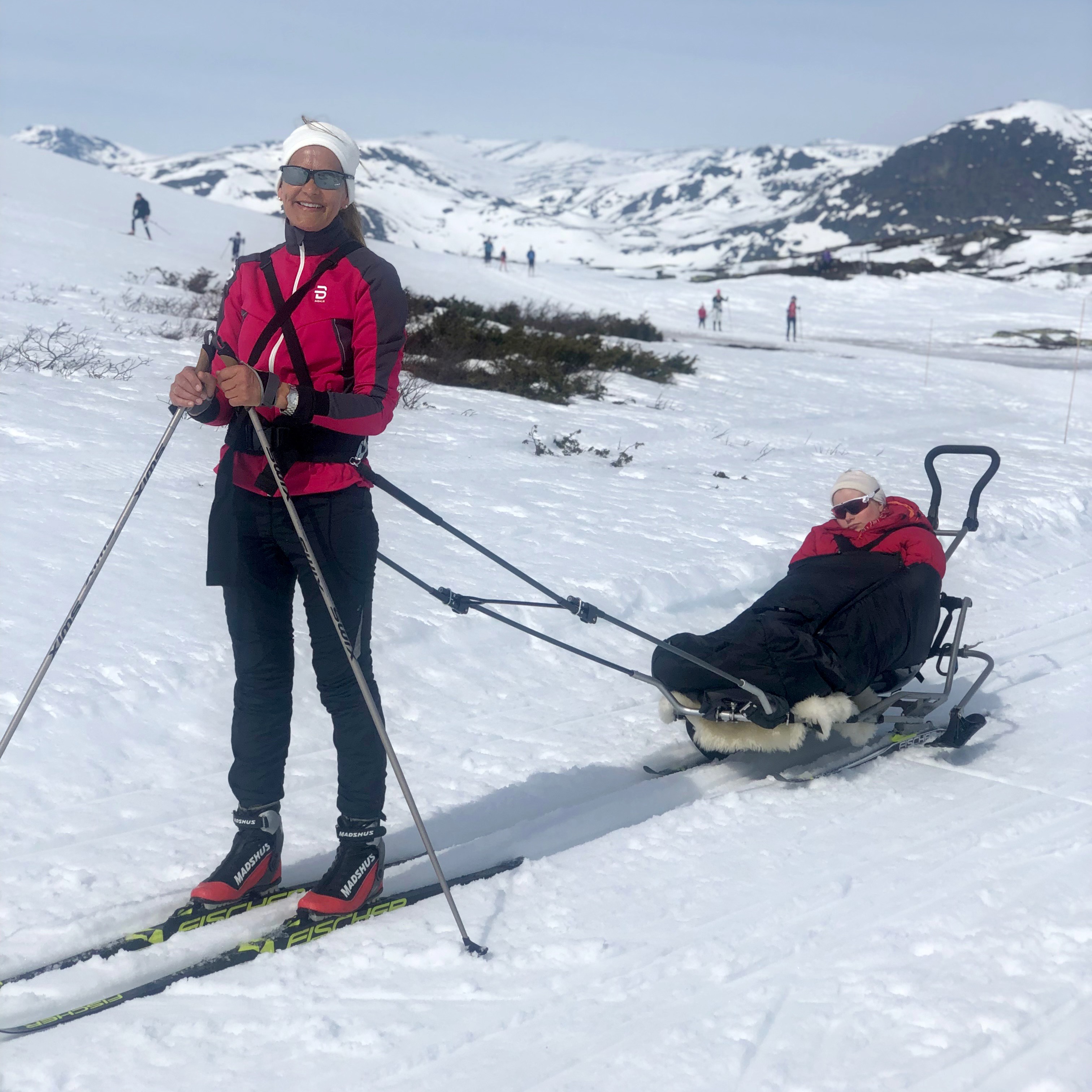 Since she (and we) depend on several types of aids, we as a family chose to buy a house-lot many years ago for later to build a house. It became a long process, but it is incredibly important for us to have a home where there is room for everyone, including Katarina's needs. We are generally more tied to our home than other families, and we wanted to bring nature into our home with large windows. 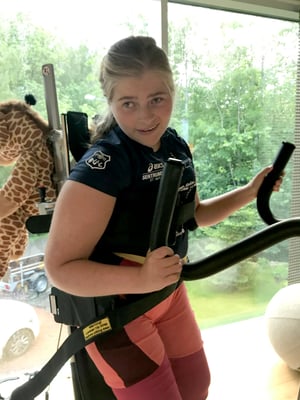 Innowalk is an assistive device we have waited a long time for! Now it has been with us since February this year. Katarina had a great need for a device that could give her a good, thorough exercise, and we quickly saw results.

The best part is her great pleasure in walking in the Innowalk; she radiates joy every time! Her epileptic seizures are reduced, and she holds onto the arm movement handles, which she would never have done before. We find that she is much more willing to hold on to things with her hands also in other activities, eg. by cycling, on the SMART board at the school, in carousels on Tusenfryd, an amusement park, or in the walking frame.

Therapy pools have been an important activity for her in all these years. She can walk alone in water, but earlier she walked a lot sideways. Now she has on several occasions walked independently straight ahead.

We look forward to seeing Katarina's further development. The collaboration with the "team" around her, skilled supervisors from the NAV insurance company, and the assistive device companies can only lead to further progress for her.

I am Katarina`s mother. I detected early that she had a huge need for activity and stimulation, in addition to her medical challenges. She could rarely move her arms or legs. We had to make plans for short and long-term; for the whole family, specific for our future home where we all should live a good life together for many years. My passion for helping Katarina is that she should have the possibility to experience the same as other children on her age. I think my background has been a guide for me in how I understand Katarina. I am educated as nurse and has most of my life worked in the Pharmaceutical industry (research & development and external affairs). I am present in environment where I meet new people all the time, this helps me to increase my self-reflection. Katarina is the main person who gives me energy and make me do everything for her to get a better life!

An important goal is to make patients stand upright

Dr. Michael Utech, owner of the Institute for Holistic Exercise Therapy in Hanover, explains in an interview the philosophy he follows...