Locked-in Syndrome (LiS) is a rare neurological disorder often described as the closest thing to being “buried alive”. How is it to live with LiS and what are the steps of the recovery?

Conscious but paralyzed and voiceless

The condition is characterized by the preservation of a conscious mind, but with a body completely paralysed of nearly all voluntary muscles except for vertical eye movements and blinking.

Acute brainstem lesions is the most common cause of LiS. This is the part of the brain that acts as a bridge between the brain and body. Other rarer causes are trauma, tumours or infections. People who experience this become paralyzed and voiceless with no means of limb or facial movements, often needing artificial respiration. The affected person cannot communicate but is aware of their surroundings; they can hear and see and have normal cognitive function and reasoning ability.

Read more: Ria Cuppers: “Restricting therapy to the clinic only is not enough”

It has been shown that more than half of the time it is the family and not the physician who first realize that the patient is aware. MRI and eye-movement tests, in addition to clinical assessments done by specially trained examiners, can help diagnose the syndrome. Distressingly, recent studies report that the diagnosis of LiS on average takes over 2.5 months and in some cases several years before these patients, locked in an immobile body, are recognized as being conscious.

Advancements in medical care, rehabilitation, and communication technology have enabled many chronic locked-in syndrome patients to lead meaningful lives. However, early recognition of LiS is important for rehabilitation. It is essential that LiS patients play an active role in decision-making processes regarding their rehabilitation. A reliable code to indicate yes and no usually constitutes the basis of communication. Initially many use eye movements and blinking to communicate. Because language skills are usually intact, many employ a system of spelling via an alphabetical code whereby the person with LiS indicates the desired letter by moving their eyes or blinking.

To be able to provide individualised rehabilitation that meets each and individual need, a cross-functional assessment is necessary. The overarching goal is to improve the functional level and independence. In early rehabilitation, attention should be aimed at the small voluntary movements that remain (often in a finger, foot or in swallowing and sound production). 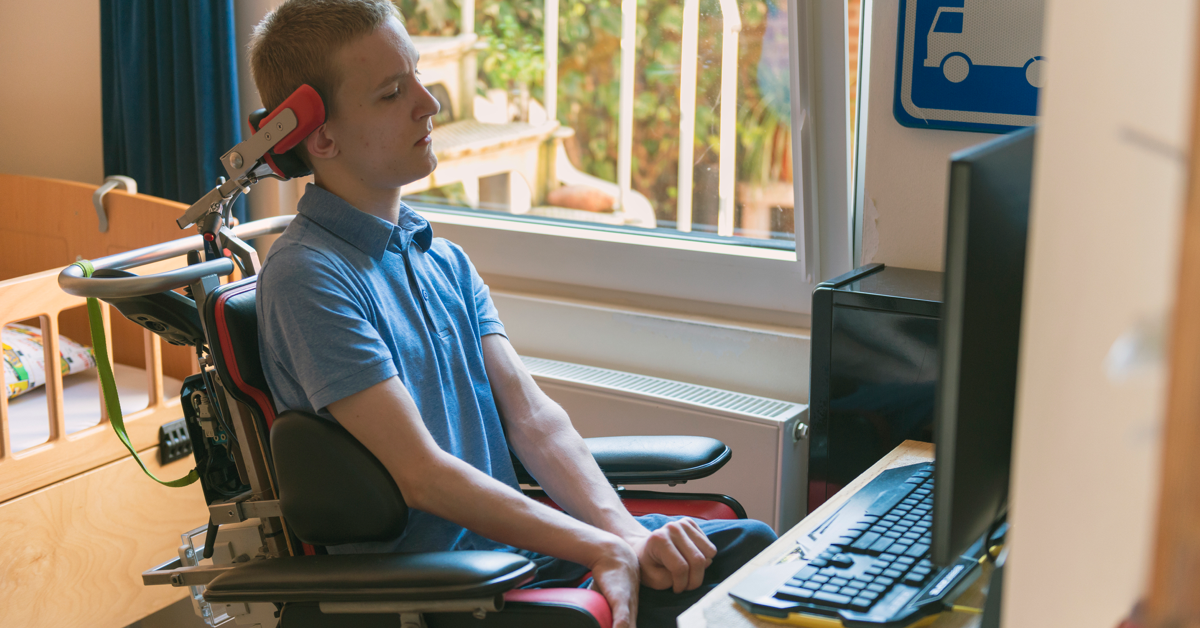 Further on, to promote the functional use of the patient’s emerging voluntary movements, early therapy is done lying on the back and on the stomach, in addition to sitting position in order to stimulate increased control of the upper body. It can be helpful to progressively move the patient into a more vertical position to do gait training or to improve arm function.

Exercises to maintain range of motion, as well as breathing, eyes, head, trunk and limb control exercises are performed throughout the rehabilitation process. Even after several years, spasticity often remains a significant problem for many. Stretching exercises, mobilisation in standing position, use of antispasmodic drugs, botulinum toxin injections and robotic movement trainers help to decrease spasticity.


Assistive devices are crucial for the quality of life

Devices to aid in communication and other assistive technologies have proven beneficial as well as allowing individuals to become active members of society. The level of independence is directly related to motor recovery, but assistive devices can compensate in many ways. For mobility, some of the LiS patients can move around independently, most often in a powered wheelchair, and some may be able to drive an adapted car.


What is it like to be locked in your body?

Public awareness of LiS has increased a great deal over the last 10 years. Much of this can be attributed to high-profile celebrities, such as the theoretical physicist, Stephen Hawking. There are even references to the syndrome in popular American dramas such as CSI: New York and Desperate Housewives.

French journalist and editor in chief of the fashion magazine Elle, Jean-Dominique Bauby, played the most important role in creating awareness. He suffered from this condition after a brainstem stroke in 1995. For insight into how it feels to be a Locked-in Syndrome patient, you can read his book The Diving Bell and The Butterfly, or see the 2007 movie based on the same story.

To get another view on how it is to live with and recover from Locked-in Syndrome, Kate Allatt gave a TED Talk about her experience recovering from the disorder.

When Wenche started her rehabilitation, her main goal was to live a fulfilling life with her family. With a positive attitude and hard...

Locked-in Syndrome (LiS) is a rare neurological disorder often described as the closest thing to being “buried alive”. How is it to...