Being diagnosed with spinal muscular atrophy (SMA) does not necessarily mean that you cannot achieve great success and to lead a happy and productive life. With Spinraza, together with intensive daily exercise in the Innowalk, Aisha is living her life to the full.

Aisha sits in her room, smiling and laughing. She’s a reflected 10-year old who wants to become a clothing designer when she grows up. Though she now uses an electric wheelchair all the time, it never gets in the way of achieving what she wants. She loves being out with her friends, and at home she spends time drawing and baking her favourite cakes, often together with her smaller siblings.

Aisha was just 18 months old when she was diagnosed with SMA, a rare genetic condition that affects the spinal cord and nerves, resulting in muscle wasting and weakness. At first, her parents were told it was type 1, which is the most severe type of SMA, but fortunately it turned out to be type 2.

Read also: What is SMA?

In the past, there was no medication for SMA, and life expectancy was uncertain. Fortunately for Aisha and her family, a breakthrough in treatment has vastly improved the future for children with SMA with the drug nusinersen, marketed under the brand name, Spinraza.

Her parents first became suspicious that something might be wrong with Aisha when they noticed she lagged behind in hitting milestones and wasn’t moving like other children her age. They took her to the pediatrician in a town called Västerås, Sweden, who sent them to a neurologist. “When the neurologist told us she had a disease, called spinal muscular atrophy, it was devastating,” Fadumo, her mother, says. “Especially when he told us that Aisha has to use a wheelchair all her life”.

“It was an intense time. We worried and spent day and night investigating what to do”, Fadumo recalls. A few years ago the drug nusinersen, which had shown promising results, became available in Sweden. In clinical trials, Spinraza significantly slowed the disease’s progression and, in many cases, improved the strength of individuals with SMA.

After hearing positive reviews from other parents, Fadumo discussed the opportunity with Aisha’s pediatrician, and she got the first injection a year ago, when she was 9-years-old.

While Spinraza is still not a cure, the medication allows for continued motor improvement, particularly in combination with intensive training. 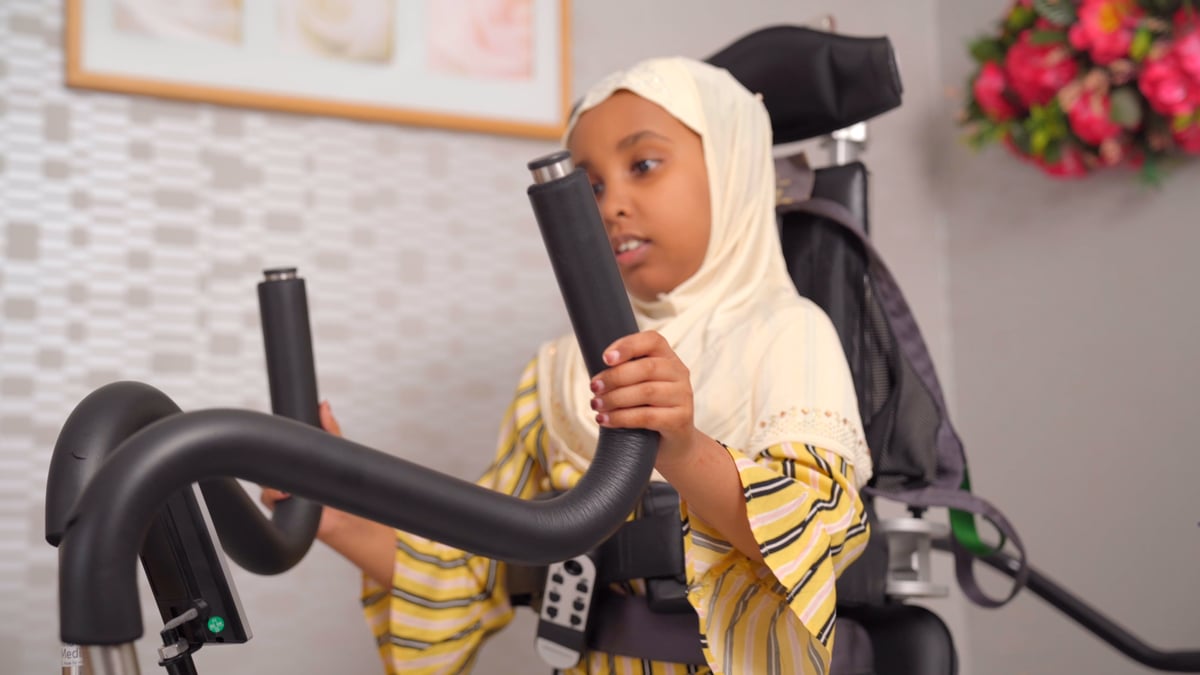 The importance of physical exercise

Aisha and her family have worked with a physiotherapist to establish a safe exercise program to ensure maximum mobility, build lung capacity and muscle strength.

Aisha’s physiotherapist knew that treatment with Spinraza should be complemented with activation of her muscles, and recommended to use the Innowalk at home for dynamic standing and training with weight bearing. Already, her parents see improvement in Aisha’s strength and stamina. She is able to participate more and loves going on walks and picnics.

Several studies done at University in Lund, Sweden have shown positive health benefits when exercising in the Innowalk, a dynamic, robotic movement trainer. They also found that children with SMA who used the Innowalk in combination with Spinraza, had great motor improvement.

“The Innowalk gives me the opportunity to stand upright and move both my legs and arms. It is really cool! I can go on and on, and it feels fantastic” Aisha tells. “I use the Innowalk every day now, for about 30 minutes. I feel more energized and happy, and I’ve even started to sweat for the first time in my life” she laughs.

Although Aisha needs a wheelchair, her parents feel positive about Aisha’s future and hope that she will be strong enough to have a job and help other people, which will help enhance her quality of life.

Meet Aisha in this film