Liz Cowan: Symmetrical Positioning or Movement? We Need Both!

One of my concerns as a paediatric physiotherapist is the amount of time children with disabilities spend being static in chairs/supportive equipment as opposed to moving. I worry that medical concerns about symmetry and posture result in children being more static than before. 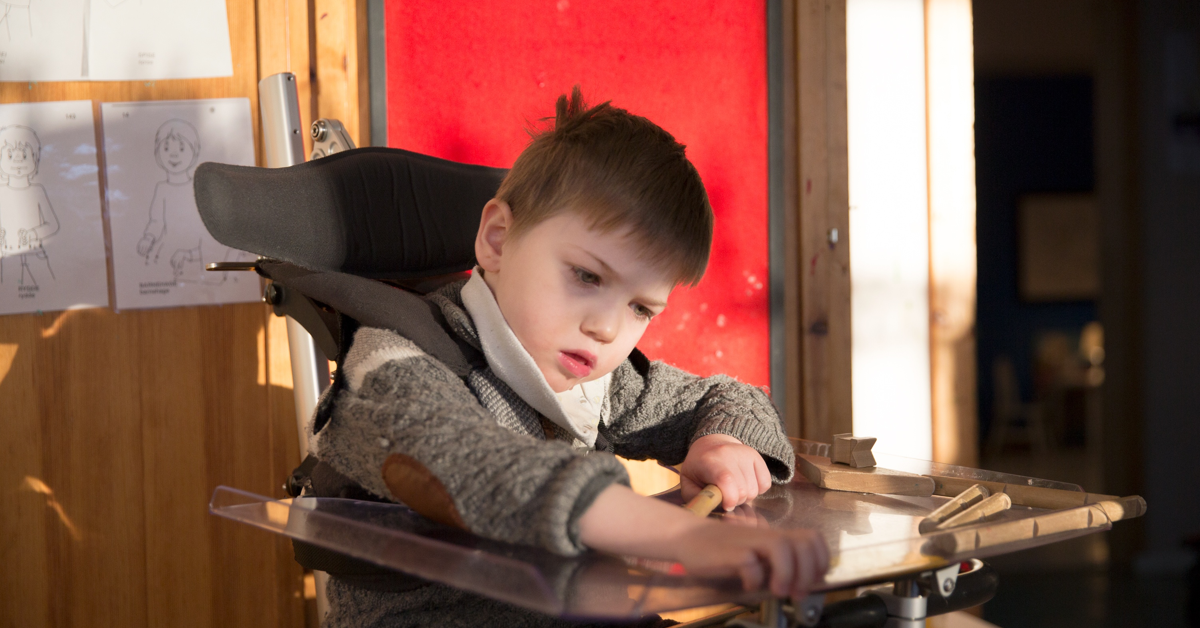 Asymmetry can present a real problem – an imbalance in muscles around the hip can contribute to the hip joint becoming displaced, and asymmetry in the trunk can lead to respiratory problems as well as compromising the workings of our internal organs. So, ensuring care in positioning is crucial for maintenance of long-term good health.

But children need to move to develop gross motor skills – nobody ever improved their ability to use their muscles by being held in a static position.

Of course, some children have such complex needs that it may be possible to help them to move therapeutically within physio sessions, but on a day to day basis parents may struggle with that at home. As part of my role, I demonstrate therapeutic handling – how everyday moving/dressing/playing with a child can be made more therapeutic. I also research available equipment and assess whether it is suitable for the client.

Making the most of their abilities

Therapeutic handling is a term we use to describe how to move a child or young person in a way that makes the most of their abilities, while not encouraging abnormal movement patterns that can make their difficulties worse. The physiotherapist uses therapeutic handling and will advise parents or carers on how to use it as well.

While dressing your child, the therapist may be able to show you how to support your child in sitting while they get dressed. The child then has to use what movements they have to maintain anti-gravity postures, or react to the passive movement of their limbs. As dressing is an activity done at least twice daily, it means that the child is having therapeutic intervention at least that often. It may take extra time, and a lot of practice, before you feel you “have the knack”. But over time you may realise that the child does not need as much support as you once had to give, or that they are actively helping with tasks such as moving their arms, that they were not doing before.

READ MORE: How to adapt your home for a child with disabilities

Sometimes the therapeutic handling that takes place within treatment sessions is more than can be achieved by one parent or support worker alone. For example, a therapist assisting a child to stand or walk may need to support the child at the hips or trunk, while another person is enabling a step to be taken. But therapeutic walking can be difficult to facilitate at home.

Physical activity with the Innowalk

A piece of equipment I have recently been using with my clients is the Innowalk. It is a supportive, motorised training device which allows users with complex physical disabilities an opportunity to experience physical activity in an upright weight-bearing position.

READ MORE: What effect does Innowalk have on children with Gross Motor Impairment?

The Innowalk is like a standing frame – it provides a stretch to muscles, and the upright weight-bearing position also moves the legs (and arms in the larger sizes), so there are added benefits. It is also a similar size to a standing frame, taking up about the same amount of room in the house. It starts off in a seated position, so children can be hoisted into it, and then once the straps are in place the machine moves the child into standing, and it begins to move the legs and arms. The machine itself is static, and similar to a “cross trainer” it stays still while the child moves.

Children seem to like it, partly because it looks like a piece of gym kit, and it gives them an opportunity to have sustained physical activity without somebody holding on to them. The Innowalk does the work initially, but as the user progresses, it senses when the user is active and displays this information on the readout – a great incentive to the user.

Liz has a BSc Hons in Physiotherapy from Queen Margaret University, Edinburgh. She is experienced in working with children in a variety of settings, including children’s homes, clinics and schools. Based in Warrington, UK, Liz currently works as a Paediatric Physiotherapist. She is also a committee member of the North West Association of Paediatric Chartered Physiotherapists.