Live is a tender and cheerful 4-year-old girl. She’s diagnosed with Rett syndrome, but has a more atypical disease course, which means she cannot sit, stand or walk. Live makes good eye contact and has learned to use her eyes and facial expressions to communicate.

Live developed as expected until she was around 6 months, but Madeleine, Live’s mother, still felt that something was different. - I have experience from Live’s older sister, says Madeleine. It was that experience that made her feel that there was something special about Live, but the doctors reassured her that there was nothing to worry about since Live made such good eye contact and developed as expected.

From the age of 6 months, however, Live began to lose skills, and at Christmas time when she was 7 months old, they suddenly needed to support her head when she was held. - Then I knew that something was seriously wrong, says Madeleine. It was also around that time that she had her first respiratory arrest, and a full medical examination was initiated. When Live was 10 months old, she was diagnosed with Rett Syndrome. She has a more atypical disease course and more complex disease picture than is typical for the syndrome.

Live's first years of life have been turbulent as she has developed chronic respiratory failure and has experienced repeated respiratory arrests. This led to many hospital admissions, and in 2021 she was hospitalised for most of the year due to a serious respiratory infection. She fights her way through every hospitalisation and has proven that she’s a strong girl. - I think it tells a lot about who she is, and that she has an enormous willpower, says Madeleine.

It's important for the parents to facilitate and allow Live to use her willpower and take part of activities happening around her. She cannot sit, stand or move independently, but they focus on adapting and arranging for her to have the opportunity to participate in activities. Live doesn’t use body language to express what she wants, but she communicates with her eyes and clearly shows that she likes speed and action. She loves to use the swing, going high up in the air and with great speed!

It’s important that we help her to convey her message to others. At the same time, it’s important for other children to see that even if you’re different or in a wheelchair, it doesn’t mean that you don’t want to join and be included.
Madeleine, Live’s mom

Assistive devices are an important part of everyday life to facilitate activity and inclusion. The fact that Live has the Innowalk at home gives her, among other things, the opportunity to experience the joy of standing upright, walking and moving every day.

The family has chosen to be open, and friends and family are an essential ingredient in their life. By taking part in the family’s activities, visitors better understand that Live has a serious disorder, but also that she’s Live and one of the family. They don’t want Live's siblings at 6 and 2 year of age to feel it’s a burden having a sister with extra challenges. She should rather be a natural part of their lives, and all their friends are always welcome in their home. - I want Live's siblings to be proud of her and look at it as an enrichment to have a sister who is different, says Madeleine.

The family has recently been to Frambu, a competence centre for rare diagnosis in Norway. There they participated in a child palliative care course. The course deals with, among other things, living a rich childhood even when the child has a serious disease. This is something the family valued highly. Even though Live has a serious illness, they want her to experience good quality of life and be allowed to be a child. A smile from Live is invaluable and gives them a good indication that she’s doing well.

It's important for Live and for the family that she can be home as much as possible. They have therefore adapted the house to Live's needs and have 24-hour-staffing assistants. In addition, they have access to medical equipment that allows them to handle most situations in their home and avoid too many hospitalisations. Madeleine tells that when Live is admitted to hospital, she only smiles when the pulse oximeter is removed, because then she knows she’s on her way home. It’s a clear signal that home is best for Live.

It means everything to the family that Live takes part in family life and has the opportunity to be included in all activities. The family of five has just been on holiday abroad for the first time. They are proud and grateful that they made it as a family and managed to solve the challenges that appeared along the way. They had a wonderful experience together. They also learned that next time they go on vacation, they need more assistance. Some demanding situations occurred, and there was little sleep for the parents as they were themselves responsible for monitoring Live at night. Still, they are left with the fact that it was worth all the worries and challenges because Live smiled from the time she got up in the morning until she went to bed at night, every day, all week. The journey was an enrichment for the whole family.

We proved that we made it happened as a family and we had a lovely holiday together. It was an enrichment for the whole family

Activation and mobilisation of the whole body

Live has a chronic respiratory failure, which means that they focus on mobilising and maintaining good lung function 24/7. When Live was little, it was easier to move the body and change body position to improve respiration and mobilise mucus. But as Live grows, the need for facilitation and positioning with assistive devices has increased.

Today, she has assistive devices to manage 24-hour positioning in lying, sitting and standing. Changing position, and positioning in general, has a great impact on respiration and saturation in the blood and is something that everyone around Live has been trained to perform throughout day and night.

Physical activity and mobilisation in standing with walking movements

It was Live's grandmother who first mentioned the Innowalk as an assistive device for Live. She previously worked at a special school and had seen the Innowalk in use there. Knowing Live’s love for activity, she wondered if it could be a relevant device also for Live. Madeleine discussed the possibility with Live's physiotherapist, they got a trial; and the rest is history. 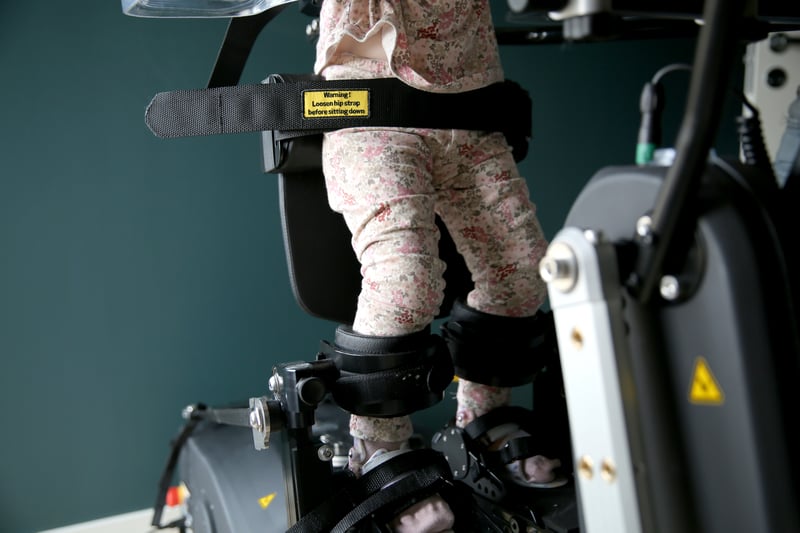 Live uses both a standing frame and the Innowalk every day, and both aids are important parts of everyday life to maintain good lung function. They experience that Live thrives in the Innowalk, and it’s an activity she really enjoys. The movement has a positive effect on respiration and has a mucus-mobilising effect. They also see that activity of the whole body has a good effect on gastrointestinal function.

See Live for who she is

In conclusion, Madeleine has one important message to health service personnel and other service staff around Live. She would like everyone to see Live for who she is, and that she is given the opportunity to live as normal a life as possible, even if she is different and has specific needs. They should all aim to see the possibilities and not focus on limitations..

We see that there is so much vitality in Live, and it’s important that she gets the opportunity to live a good and meaningful life
Madeleine, Live’s mom What Is Rett Syndrome?

Rett syndrome is a rare genetic neurologicaldisorder that occurs almost exclusively in girls. It affects the brain development and...