[Video] Ada Has CP – This Is Her Experience with the Innowalk

Did you know that you can improve your gastrointestinal function with the help of a movement device? This is just one of the benefits Ada experienced after using the Innowalk. 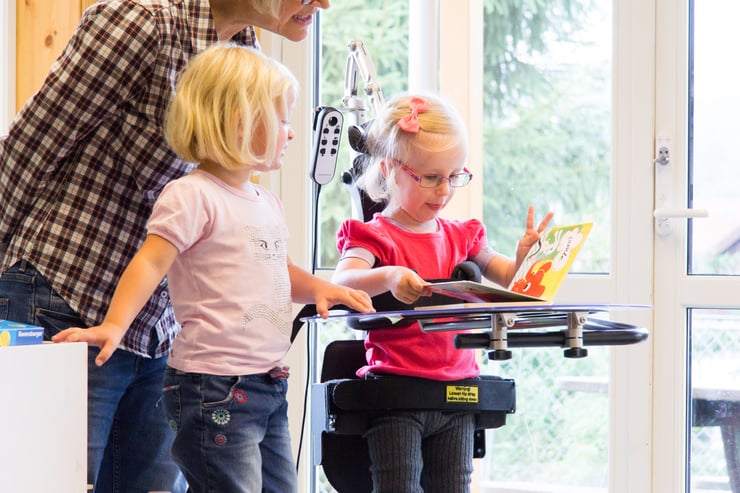 Ada, at this time a 4-year-old girl, was born 3 months premature. She has cerebral palsy (CP) with a functional level of GMFCS IV, meaning she requires physical assistance or powered mobility in most settings.

For her parents, it has been important to stimulate her in an active standing position with weight bearing and in a walking pattern. The aim has been to build up Ada’s body strength and stability, something that will give her the opportunity for increased activity and social interaction.

From a few minutes to half an hour

From the age of 18 months, Ada was given a standing frame which she used for about a year, before changing to Innowalk at the age of 2 and a half years. Part of this change involved a four week trial period, where Ada was to test and measure various functions and compare it to her situation before she started using the aid.

Her ability to transition from a standing to a sitting position was measured during the trial, showing that her ability to sit unaided increased from a few minutes to half an hour. Measurements were also made of clinically important changes in joint mobility, which may be signiﬁcant in the long term for Ada’s ability to walk in other walking aids.

Eighteen months after her introduction to the Innowalk, Ada is training in the device for 30 minutes twice a day, every day. Because she’s able to stand in the Innowalk, she’s able to join other children in activities such as reading, drawing, and group work.

Thanks to the Innowalk, Ada has gained more strength and stability in her body, and the increased activity stimulates and improves her gastrointestinal function, which is now better than before. In addition, Ada has also experienced:

Do you work with or have a child that might benefit from using a movement device? Click on the button below to get in touch – we’ll answer any questions you might have!