Early Intervention Is Not Only Possible But Crucial

Key take-aways from the CP-conference in Oslo, January 2018. 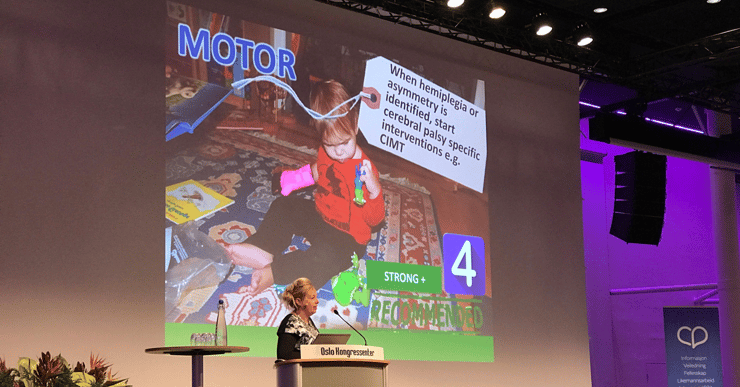 Growing evidence supports the efficiency of early intervention (EI) services to children with developmental delays and their families, and this was the theme for this year’s CP-conference in Oslo.

It was kicked-off by the internationally known Dr. Iona Novak who has a background in occupational therapy with research expertise and with a particular interest in neuroplasticity.

With the increasing pace of change in treatments and understanding of CP, existing sources of information become quickly out of date. Dr Novak has been leading a research group from Cerebral Palsy Alliance in Australia, which systematically reviewed CP interventions that worked and didn’t work. One of the key findings was that the most effective treatments for CP have been developed in the last 10 years.


International effort results in new, clear guidelines for diagnosis and treatment of CP

As part of closing the gap between the newest research and clinical practice, making sure infants with CP get up-to-date services, Dr. Novak leads a global initiative to develop international guidelines for early detection and early intervention.

If you wish to learn more I recommend you to take a look at her conference handout here.

At the conference she provided an overview of the first step - how to diagnose CP early and precisely. For early motor interventions, the best methods are shown to be active (vs. passive) practice and coaching, in addition to Baby-CIMT (Constraint-induced movement therapy).

Dr. Novak also emphasized the importance of having a plan for what the parents can do to help - because that is the first question therapists get.

Within the field of neuroplasticity there are many studies ongoing, evaluating cognitive treatments. They show that early cognition and motor development work in concert. Interventions should be task-specific, variable, and include interaction. A pilot study showed that high dose gives better outcome. However, it is difficult to be general - a good relationship with the child is as important, and finding a good balance is recommended. “We now know that we can improve and maybe avoid severity of CP-children by early active interventions”, Dr. Novak concludes.


Cooling treatment reduces the number and severity of CP

The key points in the first talk were supported by the other speakers at the CP-conference. One of them, Marianne Thoresen, Professor of Neonatal Neuroscience at St Michael's Hospital, University of Bristol, talked about the neuroprotective effect of cooling newborns. She has been leading a research team that has developed and delivered cooling treatment, known as therapeutic hypothermia, for newborns who suffer lack of oxygen during birth. After eight years, the research found that babies receiving the cooling treatment immediately after birth have much less epilepsy than before cooling treatment was introduced. Early cooling treatment also reduces the number and severity of CP and increases the number of children who survive normally.

At the end of the day, the future looks bright in terms of CP research and clinical intervention, where we now see clear recommendations for the following: