Many argue that the earlier you start –the better. But when is early enough for starting with interventions for children with delays or at risk of developing motor impairments?

Early intervention is a term used within different types of treatment approaches or prevention methods and is often explained as procedures that facilitate the development of infants and young children who have been diagnosed with a disability or are at risk of abnormal development.

If we study the literature on “The developing brain,” it’s well described that the first two years of life is a critical period of learning tasks. Why? Because until the age of two there is a burst of synapse production in the brain, and this is the time when the brain is most likely to adapt and learn (Johnston, 2009).

“First two years of life is a critical period of learning tasks.”

After the age of two, there is of course still potential for development because of the brain’s unique neural plasticity; this has for example been seen in adults with stroke and traumatic brain injury (Kleim, 2011).

Today we have some diagnostic tools available to detect disabilities or sort out the infants who are at risk of developing motor impairments. Technics used is ultrasonography and magnetic resonance imaging (MRI).

In addition to this, there are more clinical tools used by physiotherapists, such as General Movements Assessment (GMs) (Einspieler & Prechtl, 2005). GMs can be used from birth to 20 weeks of age and can help identify neurological issues which may lead to cerebral palsy and other developmental disabilities. This tool is mainly used at the neonatal department at hospitals.

Another tool used is the Alberta Infant Motor Scale (AIMS) (Darrah, Piper, & Watt, 1998). It’s a reliable and valid tool for evaluating the gross motor development of infants between 0-18 months. 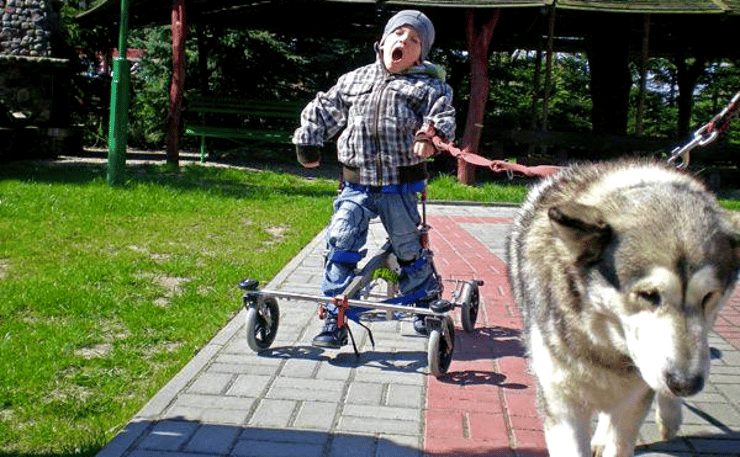 It’s an observational tool which provides the therapist with a percentile that gives an indication of the child’s gross motor function compared to the typical development of children and thereby functions as an indication of risk for motor disorders (Darrah et al., 1998). There are other tools in addition to the ones mentioned; one example is the Test of Infant Motor Performance (TIMP) (Campbell, Kolobe, Osten, Lenke, & Girolami, 1995).

When the infant has been observed over time, and a motor delay is detected, it is important that the child is followed up and stimulated by the physiotherapist and other professionals, even though the final diagnose haven’t yet been set. For example, it is known that children with cerebral palsy in many cases first are diagnosed when the child is between the age of 1-2 (Herskind, Greisen, & Nielsen, 2015).

What type of intervention programs to apply to the child?

There are several intervention approaches, but the most important is to adapt the treatment to the child’s diagnose, severity, age and the child and family needs. It is highly recommended that the interventions delivered to the child are evidence-based. Moreover,  the activities and participation should be of interest for the child and at the same time seek to increase life quality (Novak et al., 2013).

Examples of treatments with the physiotherapist being engaged are:

Iona Novak, among others, has published a comprehensive systematic review of the best available interventions for children with cerebral palsy. The article is of great support in clinical practice for any physiotherapist working with children.

It is also recommended to encourage families to introduce assistive devices at an early age. The right devices at the right time support the children in positions and with mobility to explore the environment that might promote social and cognitive development as well as motor function (Hadders-Algra, 2014).

Timeea is a playful and happy girl, who loves to spend time together with other children. She is in kindergarten every day and her...