Morten suffered a serious spinal cord injury after a pool accident, but with targeted training and a can-do attitude, he can today walk short distances with assistance. To be physically active every day, he uses the Innowalk, a motorised movement devic.  Increased activity in standing has contributed positively to mental well-being, but also physical function.

A somersault turned life on its head

During Christmas 2017 Morten and the whole extended family are on a three-week holiday in Thailand. Children and adults enjoy themselves in the nice weather and appreciate being together. After a long day of swimming on the beach, shopping in the city and dining at a restaurant, they end a wonderful day by the pool where they stay.

Morten says that he actually intended to go in the shower but chooses to take one last bath in the pool with the others. The previous days he had done somersaults into the water; not dived since the pool is only 1.5 meters deep.

Morten does a somersault into the water this evening as well, but after hitting the water, the back of his head strikes the bottom of the pool. He breaks his neck in the collision and can’t move his body. He is conscious but does not get out of the water. Fortunately, the nephew discovers that he is lying on the bottom and warns Morten's brother who quickly gets him out of the water.

It gets chaotic around Morten who lies motionless by the pool. His wife calls an ambulance, and at the local hospital in Hua Hin, it is quickly discovered that this is an extensive injury. Morten is then transferred by ambulance helicopter to Bangkok. Here he has surgery and remains on a ventilator for the next 3 weeks before returning to Norway.

At the hospital back home, they eventually get control of one of the lungs that has collapsed, and they can take him off the ventilator. On January 18th, Morten travels to Sunnaas Rehabilitation Hospital where five months of tough rehabilitation awaits. At that point, he can just barely move his left big toe!

Extent of injury and training

The injury turns out to be an incomplete spinal cord injury at C4, ASIA level C. This means that Morten's injury is at neck level (C4), and since the injury is incomplete, he has some muscle function and sensation below the injury level, but the muscles are weak.

At Sunnaas Rehabilitation Hospital, the tough training and the job of learning to drive an electric wheelchair begins. When Morten leaves Sunnaas after five months, he can barely lift one arm a little and move his left leg sitting in a wheelchair.

Morten is back home in Farsund the summer of 2018, where he lives with his family in a care home for a period while their house is rebuilt to accommodate new needs. Fortunately, it is possible to adapt the house that he loves so much. The view of a lake is so beautiful and means a lot to Morten. 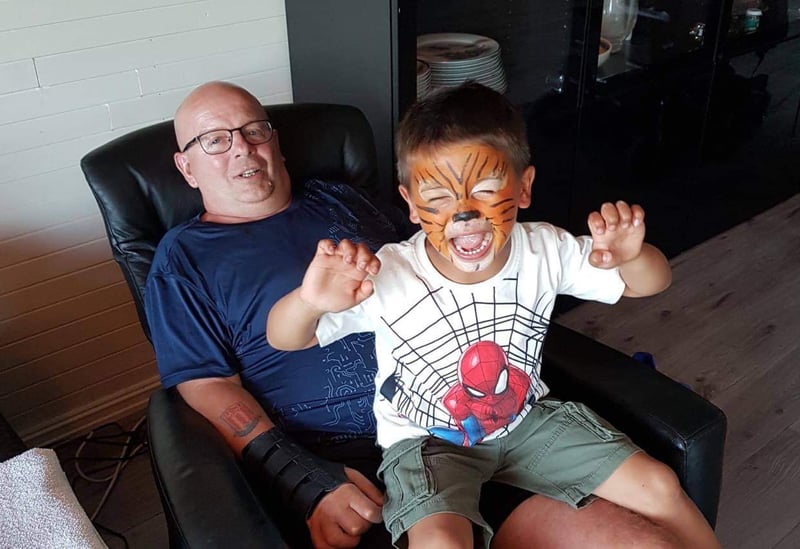 Before the accident he had worked for 32 years as an offshore mechanic, he was a co-owner of a pub and enjoyed being on the go. Life is different now, but Morten thrives in his house and feels safe there. He has good and caring assistants who help him in everyday life, and children who add energetic action and liveliness.

Morten is very social, has a good mood and a positive attitude towards life. Friends are constantly stopping by for a chat. He thinks it works best if friends and family come visiting him, as the house both inside and outside is easily accessible and facilitated.

What are the future prospects?

Morten controls his electric wheelchair with a joystick using his chin. It allows him to move independently from A to B, which gives a feeling of freedom. He uses the wheelchair as his primary transportation method, but getting on his feet again is the big goal.

Together with his enthusiastic and dedicated physiotherapist, Morten works on setting new goals and subgoals, and with good help and support from three assistants and a climbing harness, he is today able to walk a few steps. Morten has a strong desire to be able to walk with less support over short distances at home, and that is the goal they have decided to work towards now!

Morten's biggest challenge is increased muscle tension in the pelvic region and extension spasticity in the legs. Voluntary movement in the legs is limited to the left knee and hip, in addition to some movement of the right knee.

Anine, Morten's physiotherapist, was familiar with using the assistive device Innowalk for children with similar challenges. The Innowalk is a motorized activity device that provides assisted, corrective and repetitive movements. After trying an adult model herself at a seminar, Anine was convinced that this could be something for Morten, because:

Innowalk is the only assistive device that can activate users, who have little independent function, in a dynamic standing position. You can use it both sitting and standing and thus adapt the activity to your daily capacity.

You can choose whether you want to increase the activity level further by including arm movement.

In March 2019, Innowalk came into the house. After a gradual habituation, Morten now has 1-hour long sessions in Innowalk daily. Some days he stands for up to 1.5 hours since he experiences great well-being by being in a standing position. He says that he got quite tired at first, but that the training got easier and easier. Now, 1.5 hours is not a problem. The use of arm movement varies from between 45 minutes to the entire session where he is in activity. His personal assistant helps him get in and out of the Innowalk as well as handle the remote control that regulates speed and position.

Usually I sit in a wheelchair and see the world from that perspective. In the Innowalk I get higher up, giving me a new perspective on the world around me. I love it!
– Morten

Standing also changes the pressure points on the body, and he finds it quite comfortable since he spends so many hours sitting where the pressure is on the seat.

Before Morten started with the Innowalk, he used a standing table and a motorized bicycle for arm and leg training. Due to spasms, this did not work as intended, as it became difficult to combine the movement of arms and legs simultaneously in a sitting position. Now he only uses the Innowalk since it gives a good combination of standing with weight bearing at the same time as he gets to move his body. The experience is also that the spasms are reduced more in this position.

That said, it is important to point out that Morten's spasticity is still a challenge, and it has been difficult to find effective measures. Both Botulinum toxin and other anti-spasticity drugs have been tested, but unfortunately with little effect. This means that it can also be challenging to use the Innowalk in periods when Morten has severe nerve pain and increased spasticity. During these periods, it seems that mobilization carried out by physiotherapists is most comfortable for Morten.

Both the physiotherapists Anine and Morten see that increased activity in the Innowalk over the past year has had an effect on his motor function. His standing and walking function has improved, and this change is reflected in everyday tasks. He can now get in and out of the car more easily, which in turn gives him greater freedom in that he does not have to sit in a wheelchair in the car. He can visit friends and family members who have enabled access for manual wheelchairs.

During gait training with a physiotherapist, they have now also reduced the assistance from two to one person. Efforts are now being made to make it safe for Morten to move around at home with less assistance, with only one assistant and an adapted walking device.

In addition, Morten exercises in the pool every week. His brother, who accompanied him on the holiday trip to Thailand, is a physiotherapist, and every week they go to pool training together. In the water he trains to walk, and now he is able to squat when he stands in a corner of the pool.

He is constantly experiencing improvements, but he himself thinks it goes a little too slowly! Innowalk as an activity device in the future

Morten's motor function has got a "boost" during the last year, and the Innowalk has contributed positively in combination with the training the physiotherapist has provided on land and in water. The Innowalk will continue to be an important activity device for Morten so that he gets a good hour of physical activity every day, which is recommended by the health authorities. Especially during the periods when his shape isn’t quite at its peak, exercise in the Innowalk is important for his physical and mental health.

Morten suffered a serious spinal cord injury after a pool accident, but with targeted training and a can-do attitude, he can today...