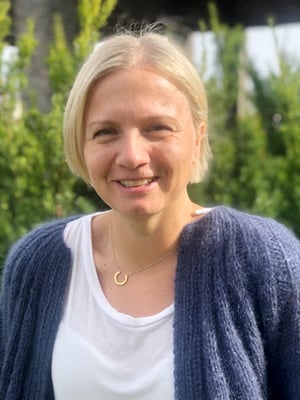 Kristine Grastro Ekbråten is a pediatric physiotherapist in a district of Oslo. She has long experience as a clinician, both from hospitals and from working in the municipality. Kristine has used the Hibbot as a training device for a child with spastic bilateral CP diplegia for almost 6 months, and we have asked her how it has worked out.

What made you so curious about the Hibbot that you wanted to try it?

For a long time I had been looking for a walking device for a specific child. There was a need for a device without seat or harness for the child to sit on, as it was desirable to promote independent walking function. The challenge was that the child showed no interest in holding onto anything with his hands, which precluded the use of most conventional walkers. I did a search online to see if I could find something that met the needs, but unfortunately I didn’t succeed at that time. Later, in conjunction with the follow-up of another child together with Tomas Kristiansen from Made for Movement, he told me that they now had a brand new gait training device. I became curious, and when he showed me the Hibbot, I immediately envisioned that it would work perfectly for this specific child.

What do you see as different with the Hibbot compared to other walking devices?

I see a great advantage in the possibility to walk with hands free, and that there is nothing in front of the users. This gives them a unique opportunity to be more involved in activities. The support (the brace) is around the pelvis of the child and in a way similar to the support I, as a physiotherapist, usually give with my hands when facilitating a child's walking. Standing and walking in the Hibbot is of course more demanding than walking in other walking devices, as the child is stimulated to use the strength of the lower extremities and upper body and cannot “lean” on the arms. At the same time, this is exactly what I want for the child in order to develop enough muscle strength and stability to achieve motor progression and increased independence.

What was the reason for choosing the Hibbot for this child?

The main reason for me to consider this particular child as a good candidate for the Hibbot was his potential to learn to walk independently. However, to master this he needed to gain more strength and stability. He also needed support to stand, but he refused to support himself with his hands. He was 2 years old when we started with the Hibbot, and I believe the Hibbot was a good intervention!

How did you introduce the Hibbot to the child?

In the beginning we had an acclimation period where we focused on short sessions often, instead of long sessions. This because it’s motorically demanding to stand and walk in the Hibbot. It’s a workout, and workouts should be gradually built up so the child experiences sense of mastery and is stimulated to continue improving skills. The training was initially about training strength and balance in standing, and then we focused more and more on walking. Initially he had two sessions a day for about 10 minutes each. We were more focused on following the child’s reaction than following the time when balancing exercise and rest. When we saw that he was exhausted, we ended the training. Gradually we extended the sessions and ended up with one longer session per day in the Hibbot instead of two short sessions.

As a physiotherapist I prefer to work closely with the staff in the kindergarten and we cooperate in setting a long-term goal and short-team goals. Long-term goal was for this child to walk independently. Short-term goals were distances and time in standing and walking, with and without a device.

What has been important for you as a physiotherapist to transfer of knowledge to succeed with the training?

The staff in the kindergarten has been invaluable in this training process. They have been hugely engaged and creative in making the exercise motivational for the child.

They know the child well, and this is an important element when organising meaningful training sessions, and at the same time managing to keep the child’s attention. In the beginning I followed up closely to ensure that people handling the Hibbot were confident in its use and found good routines when positioning the child in the device.

How has the progression of training and the functioning of the child evolved?

The child, who after a trial period got the Hibbot granted as a gait training, has had a fantastic progress. It has been really fun to see how he has developed.

Before getting the device, he could stand up and walk sideways along the wall, but he would not go straight ahead, nor with support as he refused holding something in his hands. I felt that his motor development had stagnated for a long period of time, and there was a need to launch new initiatives to stimulate further motor development.

Before the summer holiday he finally let go and walked by himself, and now he walks 30 meters independently! He has developed gradually, and although he is walking independently now, I observe that he still lacks stability in the pelvis and compensates with flexion in the hips. We therefore still use the Hibbot as part of the training every day and train towards new goals to further improve his ability to walk independently.

In the Hibbot he is stimulated to extend his hips, and through many repetitions of this, I hope he eventually can transfer this function into independent walking. Most of the training now takes place outdoors and includes, among other things, intense workouts walking uphill, with a focus on strengthening the muscles, both in the lower extremities, but also in the pelvis and upper body.

Read more: Ria Cuppers: “Restricting Therapy to the Clinic Only Is Not Enough”

Looking back on your experience with Hibbot, what has been the key to success in this case?

Cooperation with the educational staff in the kindergarten has been absolutely essential. We have made clear long-term and short-term goals together, and everyone has always known what has been in focus. We have found that targeted gair training in the Hibbot has had a good effect. Common focus, high intensity and many repetitions have been important to achieve good results. At the same time, we have seen that keeping the child's attention and constantly adapting the training to the needs of the individual child, so that he experienced mastery, but  also has been challenged, is also an important part of achieving the goals. Together we have enjoyed the progress, and this has motivated both the child and the resource persons to continue with the training.

Timeea is a playful and happy girl, who loves to spend time together with other children. She is in kindergarten every day and her...