Timeea is a playful and happy girl, who loves to spend time together with other children.
She is in kindergarten every day and her best friend is waiting with excitement for her to arrive in the mornings.

When Timeea was born she suffered low levels of oxygen, which caused damage to the brain. In the beginning the doctors were worried that the damage would lead to an extensive disability, but luckily the outcome was not as comprehensive as first expected. Alexandra, Timeea’s mother tells us that it was hard in the beginning to believe that their little girl had a brain damage because she was moving her arms and legs like any other baby. But around the age of 6 months, they did observe that she wasn’t developing as expected. She wasn’t able to sit on her own and during voluntary movements her legs often became stiff due to spasticity.

We worried about the situation and what we could expect for the future, but we now see a happy and joyful girl who develops well and who keeps reaching new goals. She loves to play with other children and enjoys watching cartoons. She has a brilliant ability to memorize songs from cartoons or other movies she is watching and sing along with them.

Today Timeea is diagnosed with cerebral palsy and classified with GMFCS III.

The parents are very engaged in training with Timeea and have excellent guidance from their physiotherapist Eli Sletten Solsvik who has followed Timeea from she was a little baby. She is also very supportive when it comes to assistive devices.
The physiotherapist listens to their ideas and needs and takes them on board discussing what options they have and what is most suitable for bringing Timeea further in her development to become an independent girl.

“Our hope and biggest goal is to teach Timeea to walk” her mother says.

When she started in kindergarten at the age of 2 ½, she was introduced to the NF-Walker. At this point Timeea preferred to stand on her knees moving around. Unfortunately, after spending many hours in this position the hamstring muscles were getting too tight and coursing bended knees. This was the reason for applying for the assistive device NF-Walker with a bracing system correcting and supporting her legs to get her up standing and allow full stretch of the entire body. The parents remember that their first impression when they saw the NF-Walker was that it looked a bit massive, but when Timeea was in the device, they realized that it made it possible for her to stand. They also saw how nice and straight she was standing and hoped it would support her in developing further walking ability. She quickly learned to walk in the NF-Walker, but she also used it for standing for example when gathering with the other kids in the morning, where they sing and plan activities for the day. She also stands in the NF-Walker when she is drawing and painting. She has used the NF-Walker ever since and typically stands and walks in the device an hour during the day. Main reason for using the NF-Walker today in the Kindergarten is to assure good stretching of her hamstrings and avoid further development of crouching and contractures in the knees. 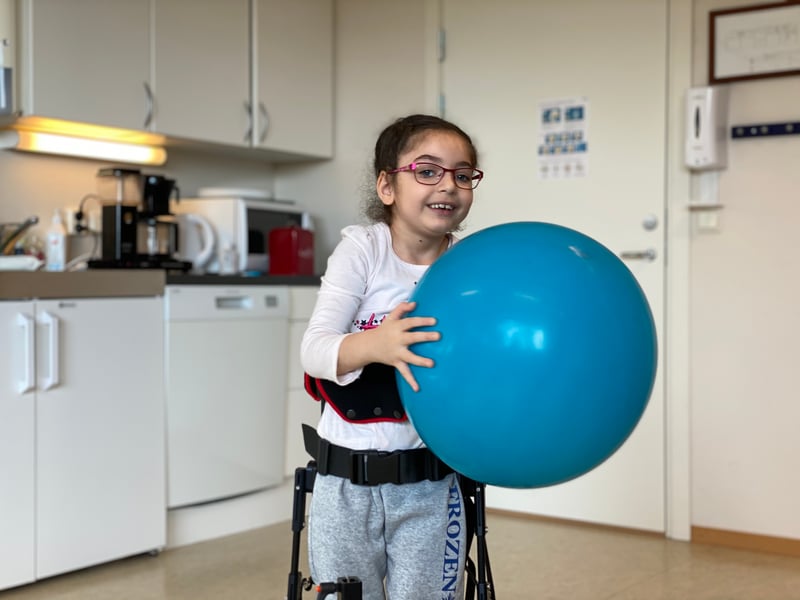 Parallel with the NF-Walker Timeea is also using an ordinary walker for quickly transfer and to keep up the speed, moving around with the other children. She moves quickly forward in this device and enjoys the quick transfers when interacting with her peers. They do see that she, due to the fast speed, is “hanging” on her arms and moves into flexion, adduction in hips and knees and is toe walking. This is not the most appropriate position, but the freedom of movement is important. They assume that the corrected daily standing and movement in the NF-Walker will prevent further development of misalignments.

The last year and a half Timeea have joined two intensive training periods at a central physiotherapy centre in Bergen, Barnas fysioterapisenter. These periods contain 3 days of training for 4-6 weeks. The goal has been to increase her walking ability and balance, and in August this year she managed to take 3-4 steps on her own.

In between the two intensive training periods the parents were searching for a new walking device.

“We were searching for a new assistive walking device that could stimulate her walking more and avoid her for “hanging” on her arms. We wanted her to achieve a more natural walking pattern. In her walker she is hanging on her arms and not really weight bearing on her feet and she tends to move into a crouch position and toe walking” her mother explains. The parents talked to their physiotherapist about their wishes, and she had just been introduced to a new walking device “Hibbot”.

In December 2019 Timeea tried out the Hibbot for the first time.

Timeea was a little afraid in the beginning because she wasn’t able to support herself with her arms which is a common compensatory pattern to keep balance. To comfort her she got a doll carriage pram to hold on to in the beginning. After a while using the device, she realized she wasn’t falling over and one of the most important outcomes of walking in the Hibbot is that she is able to walk with her feet fully on the ground. No toe walking and she has improved her balance.

Read also: How did the Hibbot come about!

Walking in the Hibbot has been an important part of the training in improving her walking ability and the parents have put in a lot of effort in using the walking aid in daily activities, like walking to the kindergarten and playing football together with the family on the football field. The wet West coast weather in Norway offers challenges when it comes to training outdoors, but the family choose to bring the device with them to the shopping mall where there is nice even surface and long pats to walk on. A nice training arena. 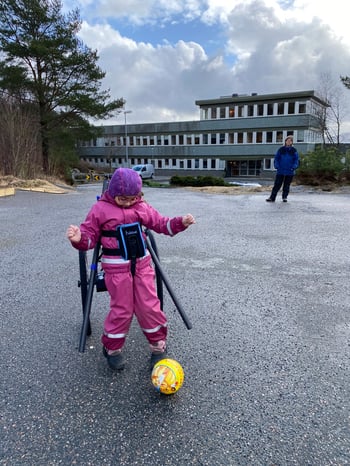 Timeea has gradually increased her endurance walking in the Hibbot, but after 20 minutes she is quite exhausted as she is challenged to walk in a more appropriate pattern which costs more energy and muscle power to achieve. But the training has also improved her muscle strength.

Timeea is now able to walk a few steps on her own. She is so proud of herself.

“She has become more confident, and we are sure the Hibbot has been a great contributor” her mother tells. She trusts her own balance better now and she is not so dependent on holding on to an adult person.

In general, the parents and the therapist are sure that the combination of the three different walking devices all are important for Timeea’s mobility and development. The NF-Walker is an essential contributor in preventing contractures and misalignment in the legs and improving the walking pattern; The walker is a great walking aid to increase distance and speed of walking, especially to increase social interaction with the other children in the kindergarten. While the Hibbot significantly improves normal walking pattern and increases muscle strength and endurance to increase the ability of improved walking ability.

Timeea is still improving her motor ability and she is a fighter. She keeps impressing her surroundings with her attitude and progress in her development.