When Wenche started her rehabilitation, her main goal was to live a fulfilling life with her family. With a positive attitude and hard work, she has reached further than anyone thought possible.

On March 8th 2000, without any prior notice, Wenche Løseth suffered an acute brainstem stroke at the age of 39. Her body was paralyzed, but her brain functioned just like before; she could see, hear and understand everything happening around her. Wenche had developed Locked-in Syndrome, a condition described as “the closest thing to getting buried alive”. As the name suggests, she was locked inside her own body.

Wenche had worked in the shipyard industry in Ulsteinvik most of her life and was employed in the school system when she got the syndrome. She was an active mother of three girls and very fond of sports and the outdoors. Little did she know that her active lifestyle would help her tremendously through a tough rehabilitation period. 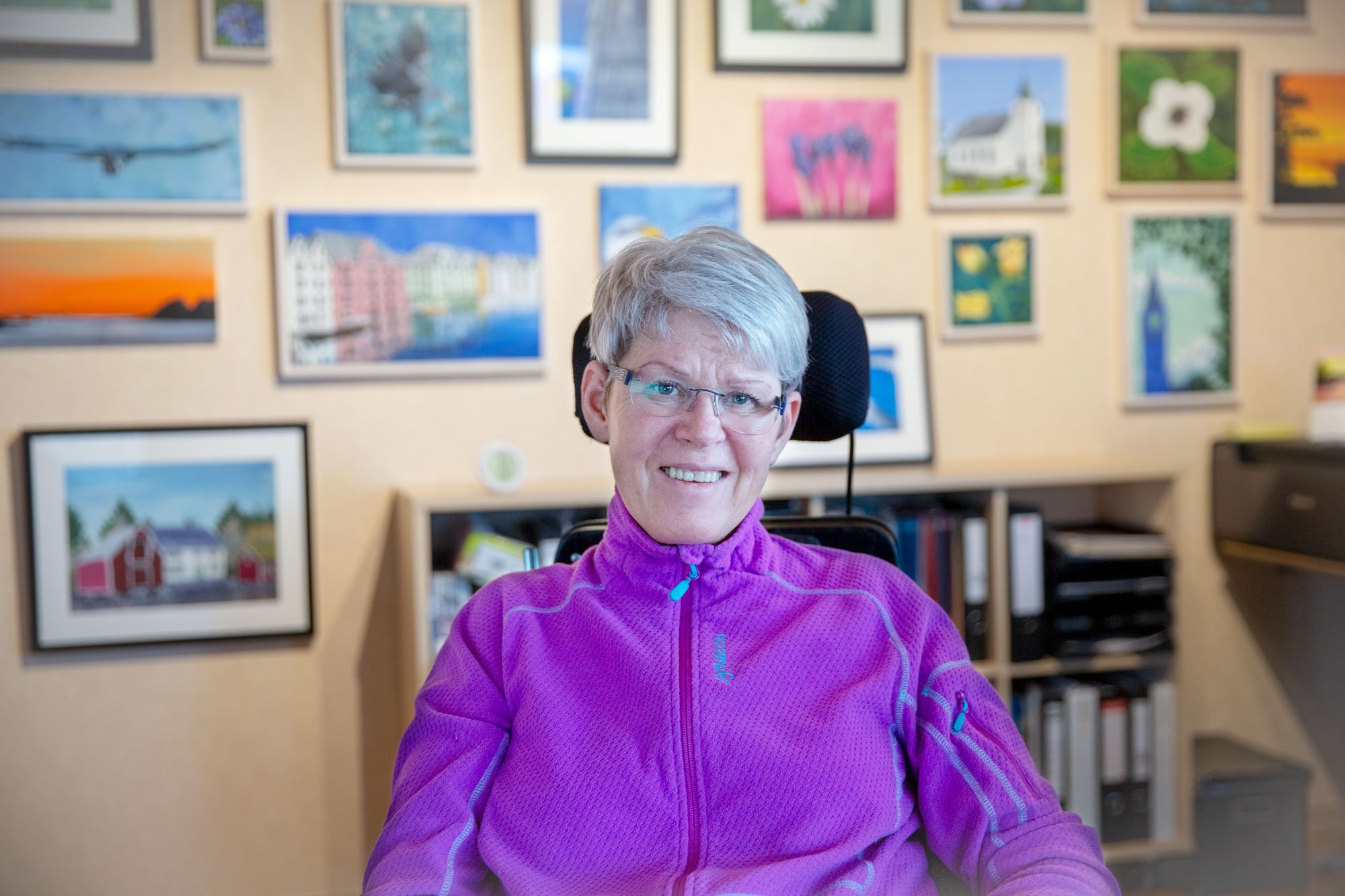 We meet Wenche on a crisp autumn day in Ulsteinvik, almost 19 years after she was diagnosed with Locked-in syndrome. She greets us with a big smile in a living room full of colourful paintings and family photos. From her living room, we can enjoy the spectacular nature of the Sunnmøre region where mountains and islands meet the sea.

In addition to taking back some control of her life again, Wenche wanted to function well enough to live an independent life at home. Her biggest goal was to live together with her family, to be a mother again, and create a comforting home for her and her daughters. She wanted to be a resource – not a liability.

There’s no doubt that Wenche’s positive attitude and mental strength has been of great help for her during tough times. She’s been determined to look forward, something she’s quick to underline during her talks: “The past is the past – I’m only able to shape my future”.

Getting where Wenche is today has been hard. As a result of all her work, she’s partly gained function in one hand. She’s got her voice back (although not the same voice as she used to have), she’s able to eat, and has regained some of her standing and walking ability with support and assistive devices.

Her training regime is hard to grasp, but there’s no doubt that she’s accomplished an astonishing feat: According to her own calculations, she’s had 18 000 hours of hard training – without a wheelchair. We’re talking elite athlete level here. Still, to this day, Wenche is dependent on reaching her maximum heart rate daily in order to maintain the functions she’s worked so hard to get back. There is no room for breaks.

“I’ve got to work out every day, otherwise I won’t live for long”, she tells us and adds that physical training is one thing – the mental part is the hardest. She needs to be switched on at all times and be fully aware of her thoughts and how they affect her.

Wenche tells us about tough, tearful days, battling a rigid system, unfamiliar with the full extent of her situation.

“It’s hard to be treated like a medical record. I’ve got a name, you know. It’s my identity we’re talking about here.”

Sitting with her in Ulsteinvik, it’s not hard to see that Wenche is something out of the ordinary. She’s got an attitude and an unmistakable courage that most people would envy.

“It’s so, so important to replace negative thoughts with positive ones. You’ve got to be eager to try all sorts of things; doing something is always better than doing nothing.”

There have also been lots of positives in her rehabilitation. Wenche has had access to personal assistants and assistive devices, all crucial in her journey towards a better life. 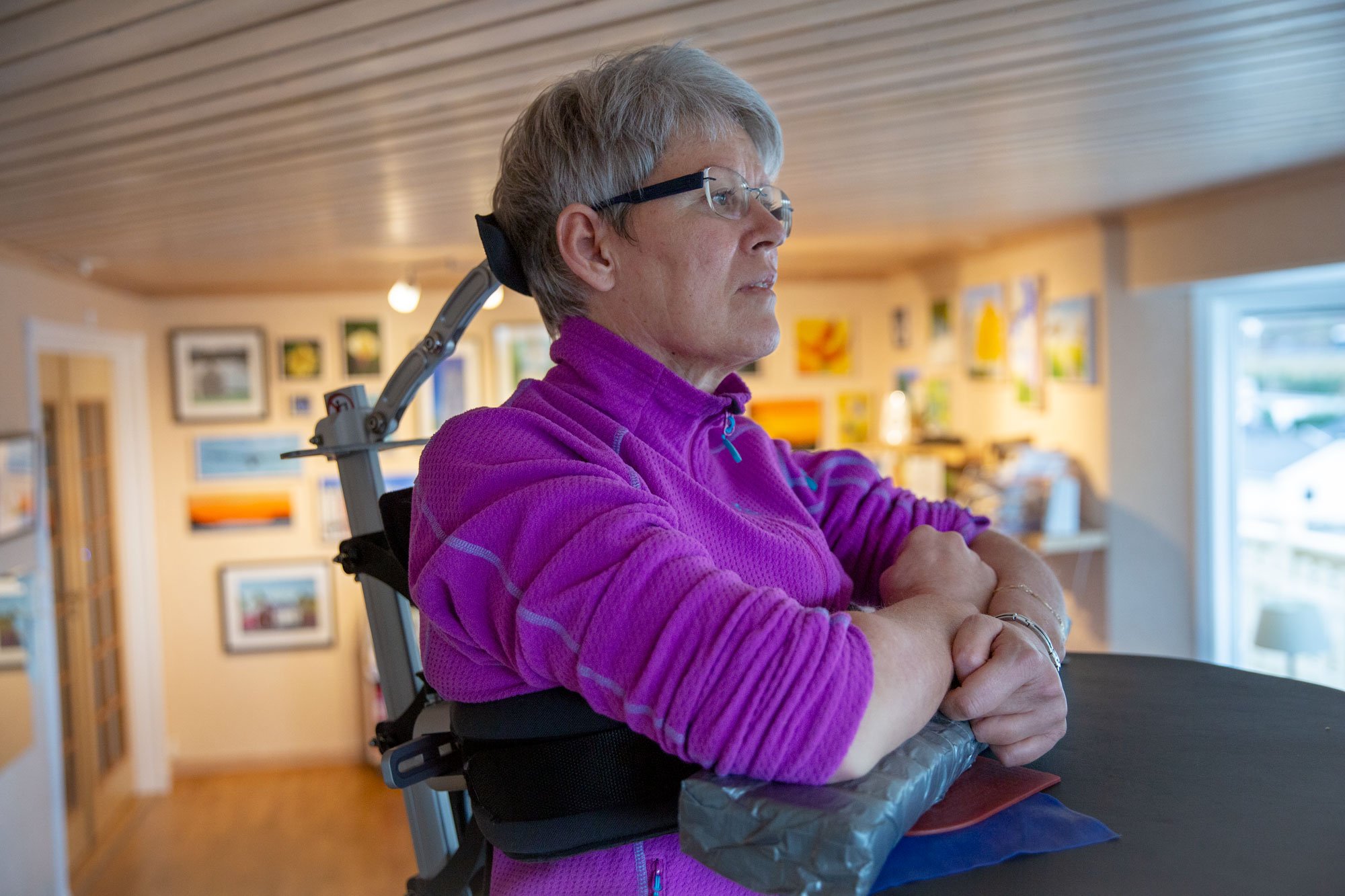 Wenche spends time in her Innowalk every day, which has given great results. She tells us about the importance of getting up in a standing position with movement when it comes to spasticity. It reduces the level of spasticity and her muscles relax, which impacts important body functions. Getting up in a standing position has also made her more independent in her daily life. She’s improved her breathing, her voice is better and she’s able to swallow food more easily. This has had an added positive effect on her appetite and sleep, which of course adds to her energy and working ability.

By sheer accident, Wenche discovered a new talent when she was working on strengthening her neck: mouth painting. Today, she’s partly making a living by selling her own artwork. 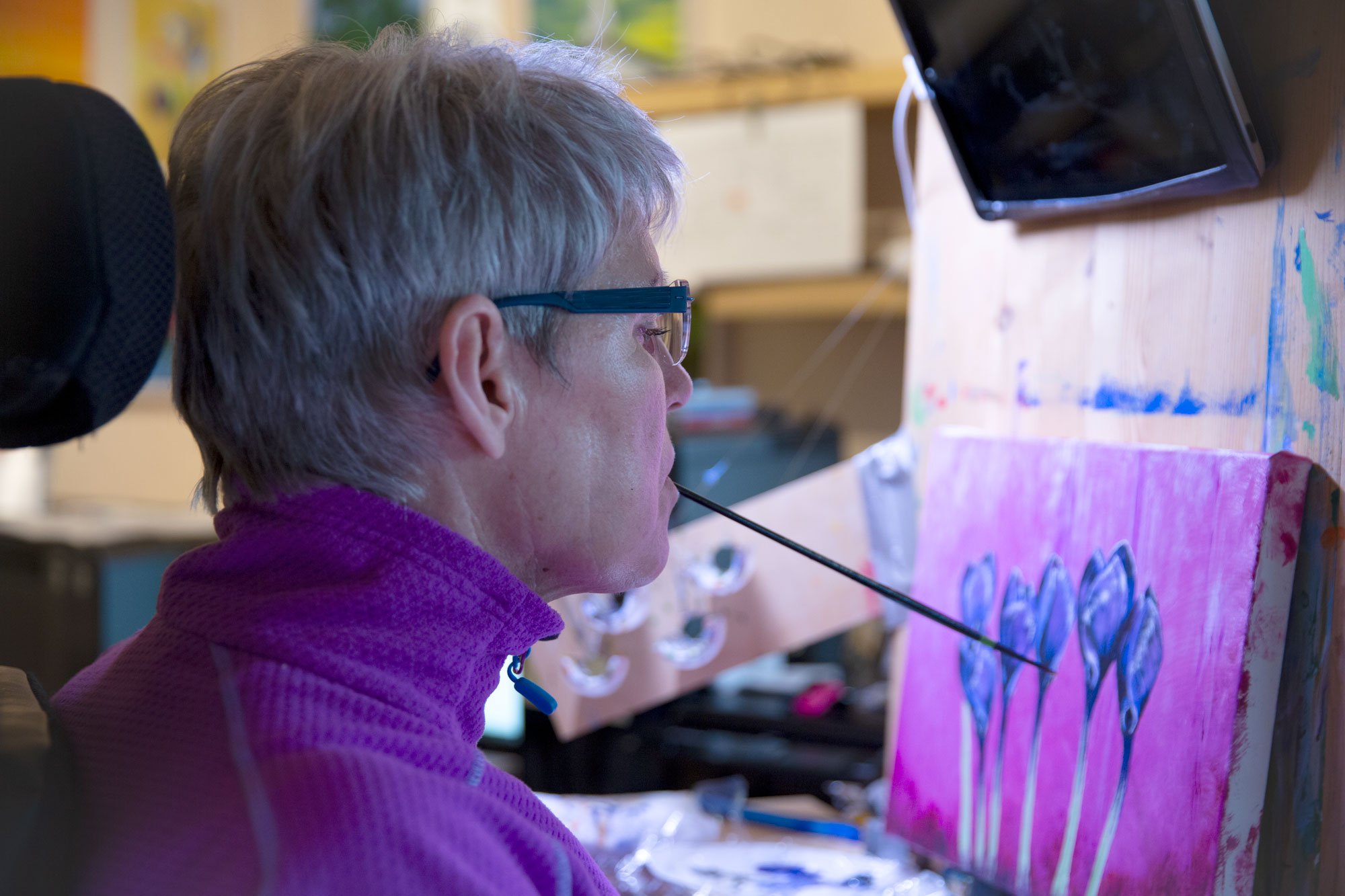 Lack of awareness about disabilities is a challenge

When asked to tell us about any issues that have been especially challenging, Wenche’s not hesitant to answer: communication.

“Not having a voice, or rather a voice that doesn’t instil confidence as I’m quite hard to understand, makes people think I’m unable to make choices of my own. It’s very frustrating. I’m the same as I’ve always been: an outspoken person with lots of opinions!”

Another issue for Wenche is the lack of universal design. She thinks the concept is somewhat misunderstood as people think just having access is sufficient.

“I would love to book a concert online and just show up at the venue, ten minutes before it kicks off, and enter with everybody else.”

Instead, Wenche is forced to spend her days planning, organizing, making calls and arrangements to get special treatment. If she wants to attend an event, she needs to meet up way in advance and often enter through the back, separately from everyone else. Needless to say, all the hassle makes it easy for her to avoid going out.

“I really don’t want to be treated like that. I’d just love to move freely, on the same terms as everyone else. That’s what I call universal design; solutions that are necessary for some, but good for everyone.”

READ MORE: Maximize Your Therapy Time with the Innowalk Pro

Having a positive attitude makes the day better

Despite all these challenges, Wenche has managed to keep her good mood and keeps looking forward.

“I don’t want my family to have to deal with a bitter old woman,” she says laughing and adds: “Everything is possible with a positive attitude.”

Her three daughters and four grandchildren all share her passion for sports. 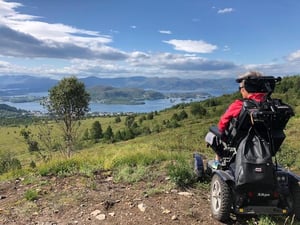 “We spend a lot of time together at the sports centre. Handball is our favourite and the family’s actually got three generations of goalkeepers at Hødd Handball Club,” Wenche says proudly.

The fact that Wenche’s got a positive attitude becomes quite evident when she tells us about her latest trek up the Breifjellet mountain in Hareidlandet.

“I didn’t get to the top, unfortunately. That last bit was just a little bit too hard – not for me, but for the wheelchair. It was a strenuous but nice hike.”

Wenche’s life and work is without a doubt a huge source of inspiration for others. We’d like to finish up with a quote that she shared under her talk at Brain Camp 2018:

Seize the day. Seize the moment. My own legs have carried me to the top many times.

Beautiful and a beauty for the soul, combined with sorrow and loss.