Meet Oliver. He is One in a Billion - A Real-Life Neuro Hero

Oliver is a trooper, a real-life Neuro Hero. His life has consisted of chronic pain, operations, investigations, admissions, therapies, daily physiotherapy, speech and language therapy, countless medications and seizures. All of this and he endures while laughing or with a smile on his face - especially when exercising in the Innowalk.

Four-year-old Oliver from the UK lives at home, near Bristol, with his loving and devoted mum and dad, Toni-Louise and Stephen. Oliver was diagnosed with an incredibly rare strain of Pontocerebellar Hypoplasia (PCH) called Encephalopathy Fatal Infantile, or PCH type six.

«Oliver is a beautiful little boy inside and out and he deserves the world”, his mum, Toni-Louise, says when recently interviewed by us.

What is Pontocerebellar hypoplasia (PCH)?

PCH is a neurological disorder that results in progressive atrophy (wasting away) of parts of the brain which affect motor skill development, movement, balance and speech. Currently there are only ten reported cases worldwide.

Children born with this condition sadly pass away soon after birth. Those who continue to live, often do not survive infancy, although some affected individuals have lived into adulthood. There is no treatment or cure for PCH, and it is categorised as a life limiting condition.

Living with a rare, life-threatening disease

As rare as this condition is, little Oliver is even more special as he has a genetic variation that means his case is completely unique.  Although medical specialists do not yet know what the variation means, it seems to be positive for Oliver as he lacks many of the typical symptoms of PCH such as suffering from devastating seizures.

Oliver needs round the clock care as he cannot sit unaided, walk, talk or feed himself. He is also prone to aspiration pneumonia and has night-time epilepsy, putting him at risk of “Sudden Unexplained Death in Epilepsy” (SUDEP). This means his mum and dad take turns to monitor him during the night.

Oliver suffers from hypertonia in his legs and hip muscles in addition to low truncal tone, making active mobility very difficult. He needs daily physiotherapy to help improve and maintain his muscles which is often painful.

Like many other young children with a complex neurological condition, Oliver lacks mobility and typical milestone development, such as being able to walk. Due to this, he is at high risk of hip migration, hip dislocation and subsequently hip surgery that brings many high-risk factors.

Given Oliver’s challenges in life he is currently exceeding all expectations, and he is doing ok. He does not have a lot of the typical PHD symptoms, is otherwise very healthy and is slowly but surely progressing. Only one part of his brain is currently affected, and there have been no signs of degeneration there.

“Whilst Oliver is very developmentally delayed, he is making good progress and continues to defy the odds”, Oliver’s mum, states. However, it does require dedication, including daily physiotherapy and movement exercises.

Oliver’s first heard of the Innowalk in Gympanzees, a charity run organisation that offers families with children of varying disabilities and ages the opportunity to play, learn, participate, and meet others in a safe and caring environment.  Gympanzees runs a pop-up in Bristol twice a year in the Easter and Summer half term to give families access to activities outside of the school routine.

This is where they first tried the Innowalk, a 3-in-1 device for safe and comfortable sitting, standing and moving exercises.

“We saw that Oliver was seeking to move, and the first time he got into it, and it went up, it was just the biggest smile on his face!”, his mum laughs.

From here they arranged for a member of the Made for Movement team to come to their home for an assessment, and then they began fundraising through crowdfunding.

The Innowalk is a device for home use, and it is not reimbursed by NHS in the UK. There are currently over 140 families with an Innowalk at home, and the majority have been funding it through crowdfunding. 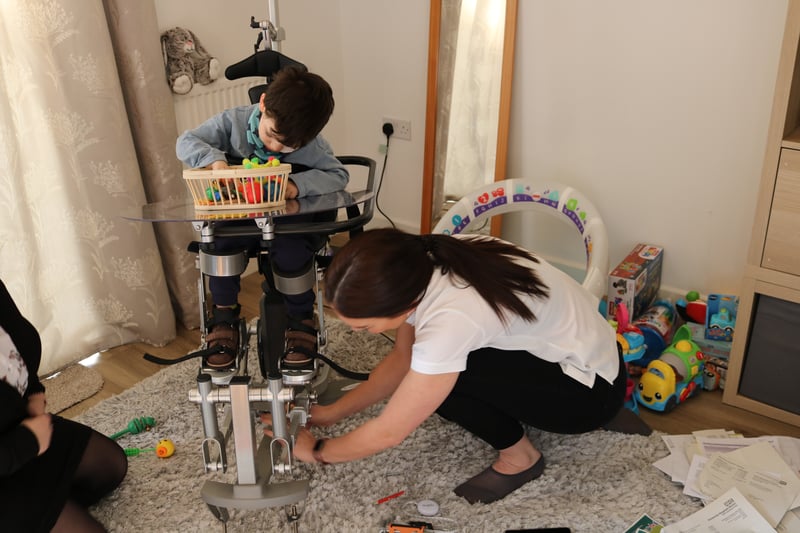 If you consider fundraising for a medical device, here are some fundraiser platforms:

When Oliver started with physiotherapy sessions, the main objective was to build up his core muscles by sitting and rolling. Today, Oliver is also exercising in the Innowalk 5-6 days a week. They started with 15 minutes sessions and have gradually increased to 50 minutes. “He just loves being upright and standing in it, with the sense of freedom and independence it gives!” his mum reports.

After just 4 months’ use of the Innowalk several benefits were achieved:

“The main reason we got the Innowalk was to increase total time in a weight-bearing position to protect worsening of his hip migration. A recent hip x-ray showed reasonable cover of his hips. This is maybe the most exiting outcome - and after such a short time-period", his mum says.

Since then Oliver has had Botox in his adductor muscles due to spasticity. He has been using the Innowalk to stretch his legs on a daily basis, and now four months later the spasticity is significantly reduced.

“It has literally been a life-changer! We have no prognosis for Oliver, and we do not know what the future holds for him, but we want to invest our energy into giving Oliver everything we can, every opportunity we can, whilst we can and celebrate his achievements along the way”, his mum concludes.

See the interview with Oliver’s mum in the video below.

The parents, Toni-Louise and Stephen are writing about their journey together with their amazing Neuro Hero. On this blog they share what their have learnt and hope to help others on similar paths.