Lauranne and Maddox Are Taking Steps with the Hibbot

Did you know that a device can bridge the gap between therapy time and daily training? Meet two kids who have made significant progress by training in the Hibbot.

Lauranne is a three-year-old girl diagnosed with spastic quadriplegia, with a functional level of GMFCS III. She used to move around by tummy crawling and made progress by pulling on her upper limbs, ultimately dragging her legs. As she made progress she found it increasingly difficult to walk with a handheld walker because of her muscle weaknesses.

It was easy to see that she had to start exercising in a standing, weight-bearing position to strengthen her muscles as preparation for walking. At her physiotherapist's initiative, Lauranne was made familiar with the Hibbot, in which she started to train from the age of 18 months. The main goal was to learn to stand while maintaining postural control and alignment.

Lauranne started by going to the physiotherapist five times a week for one hour at a time, with 30 of these minutes spent training in the Hibbot. She then expanded the use of the Hibbot after four months to her home and her kindergarten.

By gradually reducing the mechanical support, Lauranne gained strength in her whole body and was able to take her first independent steps with the Hibbot just seven months later. As of today, Lauranne thrives in the Hibbot and keeps walking further, using less and less energy. According to Lauranne’s mom, they couldn’t be happier with the impact the Hibbot has made:

"For us, the Hibbot is the most important tool in the development of our daughter Lauranne. We immediately noticed that through its use, she gained great strength and stability. Lauranne really shines when she walks in the Hibbot alongside other children in her class. This makes us so happy!"

Maddox has made remarkable progress in interaction and communication.

Maddox is a three-year-old boy diagnosed with a rare genetic syndrome, making his motor development outcome unpredictable. Not being able to move around properly, he got accustomed to shuffling himself across the floor. Activating his lower legs required manual support from his parents. He was also very selective in his choices of what toys to play with, and interaction with others was limited as well.

Because of the hypersensitivity in his palms and his selective manual behaviour, Maddox refused to hold onto something for support. This made it quite challenging to develop the proper balance.

In an effort to make a change, his physiotherapist and parents decided to start using the Hibbot. The objective was to teach Maddox to stand more independently, freeing up his hands and helping his feet to bear more weight in order to navigate more easily. 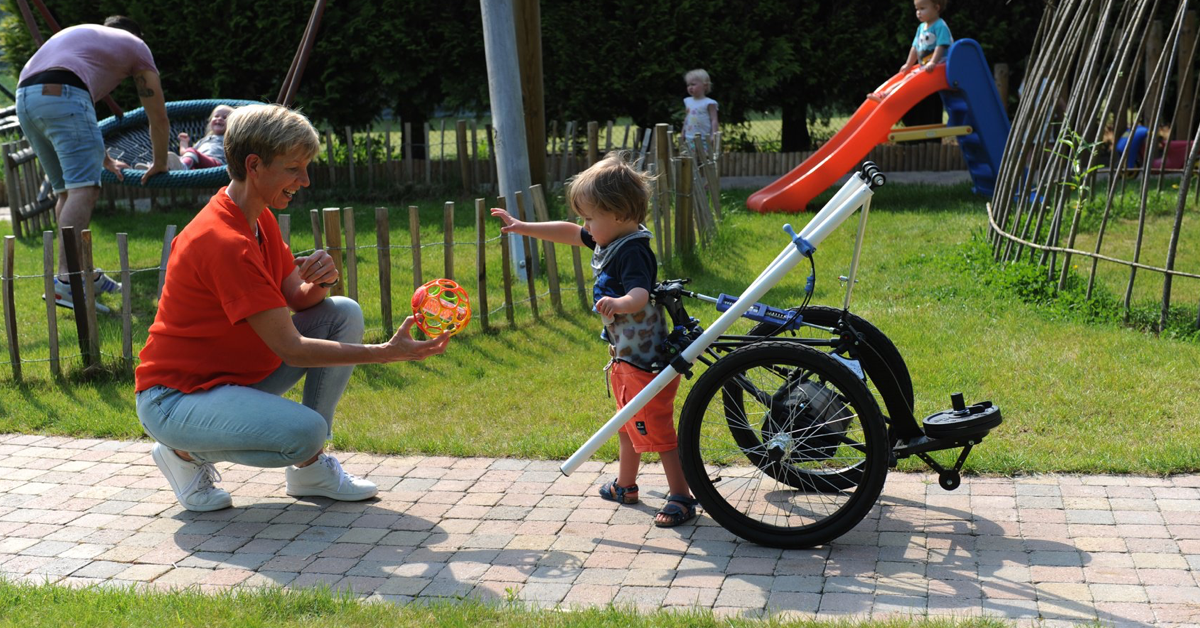 Maddox has made progress both mentally and physically. He now prefers standing to sitting, he’s become more conscious of the world around him and clearly shows what he likes and dislikes with increased vocalizations and sounds. Today, Maddox can stand in the Hibbot while rolling backwards by extending his hips. He’s able to bend and extend his knees and even takes some independent steps if he wants to reach for his favourite toys.

He’s also more aware of his posture and tries to maintain his balance. Because of his improved standing ability, he’s free to use his hands to interact with others and play with toys. Additionally, he has made remarkable progress in interaction and communication. With his hands free, Maddox can use them more actively, diminishing his hypersensitivity.

According to his mom, Maddox’s improvements go beyond “just” the Hibbot: “He’s exploring the house while crawling on hands and knees. Contrary to Maddox pre Hibbot, he’s now able to get up to a kneeling position by himself and keeps his balance while extending the hips.”