Delay in walking? A success story

Sara is almost fifteen months old and unable to sit, stand and walk independently. To assist her, she is using the NF-Walker as a gait trainer, where she can stand in an upright position with weight-bearing, leaving both hands free. This allows her to explore her surroundings and socialise with her friends.

What are the advantages of walking in early childhood?

Children can train their walking skills with gait trainers

Sara and her physiotherapist, Britt Tornes, first met when Sara was a young baby, and together they’ve achieved many important milestones. The little girl has a very rare condition known as CDG-la (Congenital disorder of glycosylation type la), which influences the metabolic system and the body's production of glycoproteins, special kinds of proteins with attached carbohydrates. There are very few children diagnosed with CDG and consequently clinical experience in treating CDG is limited. Annually, an average of just 1 in 50,000 children are born with the condition in the whole of Northern Europe.

“All children should get the possibility to stand up and move around when they are Sara’s age - we are absolutely made to move”. These are the words Britt Tornes uses as the foundation for her therapy program for Sara and the reason Sara is encouraged to enter into a weight-bearing, standing position every day. This means Sara can play with the other children at her kindergarten and explore her surroundings.


Safe weight-bearing for the muscles, joints and skeletal system

“No mobility aid on the market, except the NF-Walker, gives children the opportunity for weight-bearing in such a stable, strong position for the joints” explains Tornes. She says Sara has no independent walking function or ability to stand, but displays signs of trying to walk when offered support.

“If she's to achieve independent movement in the future, with for example a walker, it’s wholly dependent on any faults in her posture being limited or prevented as early as possible.  The corrected positioning in the NF-Walker gives Sara the support she requires to be able to stand, and gradually move around. In the NF-Walker the skeletal system gets the necessary resistance and joint variations required for functional development.

It’s about being visible - not invisible

“Being in an upright position has given Sara a new lease of life" say the staff working at her kindergarten - “the other children are curious when she is better able to play with them”. Toys are regularly placed on the table in front of Sara and the other children can play together with her, instead of around her. This makes Sara visibly light up, she smiles and clearly thrives on the opportunity to be in an upright position and at the same eye level as her playmates.

We don’t know too much about what the future holds for Sara, but we do know that all the extra physical activity has had an extremely positive effect on her cardiovascular system. Her skeletal system, muscles and joints, receive safe and comfortable resistance and weight-bearing. The kindergarten staff have observed that the dynamic position provided by the NF-Walker has helped to stimulate Sara’s digestive functioning as well - “when we stand and eat, gravity is able to encourage her swallowing action, along with other challenges connected to eating” Britt Tornes explains.

The NF-Walker is the ‘carrot’

“When Sara and I train together, she obviously gets tired. But this is how the NF-Walker becomes the ‘carrot’. She just loves to get into the gait trainer and freely move around, so we always end each training session with the NF-Walker." Tornes meets with Sara twice a week, but Sara uses the gait trainer several times throughout a given day. The plan is that the NF-Walker can be with her at home during the weekends as well. “Without a shadow of a doubt, it has drastically improved Sara’s quality of life”. 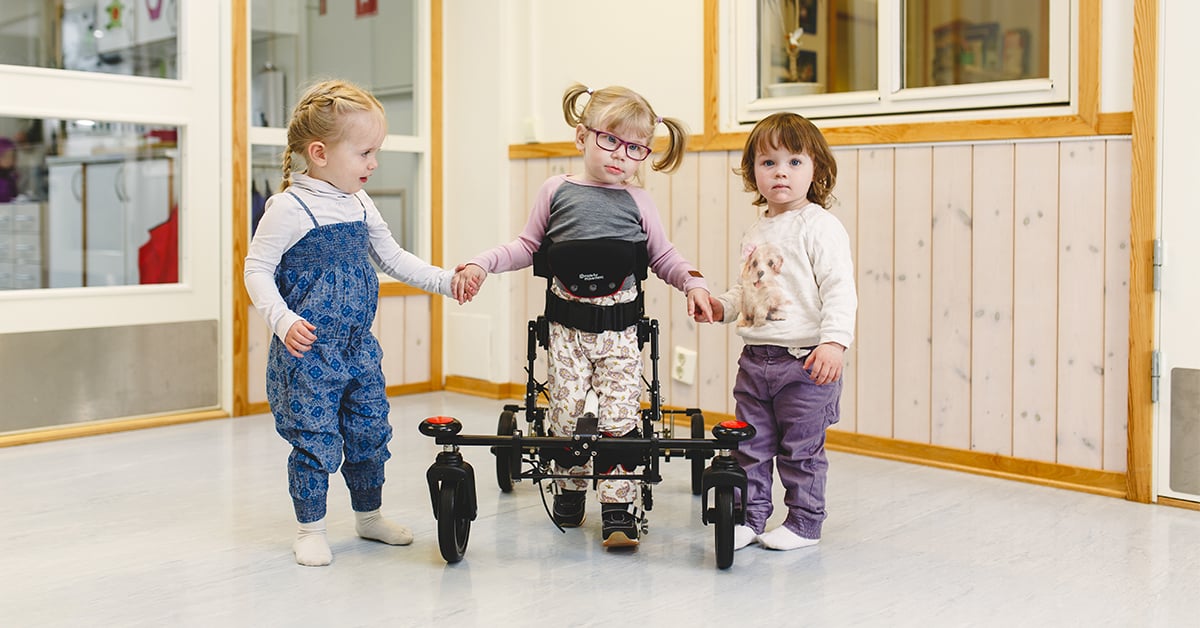 This article was first published in 2014. Today Sara is a school girl and she masters the NF-Walker with admirable skills.